Running streaks – which I define as running at least 1 mile per day for a large number of consecutive days – are surely an interesting thing to be doing. My longest one so far has been 100+ days: I ran every single day of each winter month over this winter. 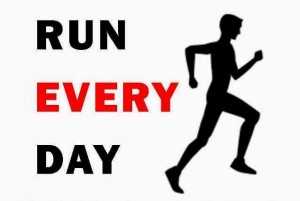 What I noticed during my streaks:

More interestingly, I believe doing these streaks gives me an experience of feeling how a habit forms and solidifies. Running every day, no matter what, after a couple of weeks leads to a perceptible, almost palpable, perspective change: running goes from being an elective activity (“should I go? Should I go now? I don’t feel like it – do I have to go, or maybe there are other things that I could be going instead?”) to being something that you just always do, without any internal questioning. Once the habit is formed, you feel differently. You no longer ever feel like not going for a run. It is no longer ever hard to get going – because getting going is just what you do. The brain rewires itself to expect going for a run rather than to expect crashing on the couch. Fascinating experience.

This entry was posted in Achievement, Running, Sports, Tips and tricks, Training. Bookmark the permalink.