This page summarizes our selected professional activities over the last few years.

8/19/2020: A 5-student Code+ team that worked over the summer on an augmented reality app for the Duke Lemur Center with Tim Scargill and Professor Gorlatova is featured in a Pratt School of Engineering news article. This work is supported by the NSF and by an NCWIT seed fund award. [ web link ]

8/01/2020: Professor Gorlatova has been named the Nortel Networks Assistant Professor in the Pratt School of Engineering at Duke University.

7/28/2020: Professor Gorlatova will give a talk titled “Edge Computing-Supported Mobile Augmented Reality” at the 2020 ABI Grace Hopper Celebration of Women in Computing.

7/15/2020: We are delighted that Jose Manjarres, who has spent the last 9 months as a visiting PhD student in the lab, will be joining Olivet Nazarene University in Bourbonnais, Illinois, as an Assistant Professor of Electrical and Computer Engineering. Congratulations Jose!

5/25/2020: Professor Gorlatova has been selected to attend the 2020 NAE US Frontiers of Engineering Symposium that brings together 85 young engineers from industry, academia, and government to discuss pioneering technical and leading-edge research in various engineering fields.

5/13/2020: Congratulations to Cyan DeVeaux who received the 2020 Department of Art, Art History, and Visual Studies Visual and Media Studies Award for her senior thesis titled “SculptAR: Exploring the Potential of Participatory Augmented Reality and Virtual Experiences in the Contemporary Art Museum.” The award recognizes an outstanding graduating senior who has conducted original research in Visual & Media Studies.

4/27/2020: Our IEEE IPSN’20 paper received the inaugural IEEE IPSN Best Research Artifact Award, which recognizes the authors who have contributed the research artifact that is judged to be most novel, easy to use, well documented, and useful to advance research. [ Paper PDF ] [ Dataset and codebase ]

2/15/2020: Our paper on collaborative image processing for augmented reality will appear in IEEE IPSN’20 (21.7% acceptance rate). Congratulations to Zida, Guohao, Yunfan, and Jovan. [ Paper PDF ] [ More information about the paper ] [ Dataset collected for the paper ]

2/03/2020: Several students in the lab have collaborated on a paper “Edge-based Provisioning of Holographic Content for Contextual and Personalized Augmented Reality” that will appear in the IEEE SmartEdge Workshop, co-located with IEEE PerCom, as an invited paper. [ Paper PDF ] [ More information about the paper ]

12/15/2019: Five undergraduate research projects on different elements of mobile augmented reality were completed in the I^3T lab over the Fall 2019 semester. [ more information ]

10/07/2019: We are grateful for the NSF support of our work on next-generation edge computing-enabled multi-user augmented reality. Joint work with CMU Prof. Carlee Joe-Wong. [ Award information ]

8/9/2019: Juan Blanco, a high school student who has been spending the summer in the lab, received the DukeRep Outstanding Trainee Award. Congratulations Juan!

8/8/2019: The lab is welcoming José Manjarrés, a visiting PhD student from Universidad del Norte in Colombia, who will spend the next year with us.

7/29/2019: We are grateful for the NSF support of the Duke OIT-led Archipelago project, dedicated to the creation of next-generation on-campus SDN infrastructures. [ Award information ]

7/12/2019: Prof. Gorlatova has been selected as one of the 2019 N2Women’s Rising Stars of the Networking and Communications Community. [ Columbia University EE Alumni News Article ]

6/28/2019: We thank the Lord Foundation of North Carolina for supporting our 2019-2020 project titled “Towards Pervasive Multi-User Augmented Reality: Undergraduate Research and Course Development”.

6/24/2019: The I^3T Lab is welcoming Gopika Premsankar, a visiting PhD student from Aalto University in Finland, who will be with the lab until September, and Juan Blanco, a high school student spending his summer at Duke via Pratt School of Engineering DukeREP program.

4/2/2019: Prof. Gorlatova is guest-editing a Special Issue of the IEEE Internet of Things Journal on Emerging Trends and Challenges in Fog Computing for the IoT. IEEE IoT Journal has an impact factor of 9.5. The deadline is August 1st, 2019. Submit your best work. [Call for Papers]

2/20/2019: Paper on imitation learning for hologram positioning in augmented reality applications, led by Surin Ahn, will appear in the Proc. of the IEEE Workshop on Fog Computing and the IoT co-located with IEEE CPS-IoT Week. [Paper PDF] [Imitation learning demo] [Extended version of the paper]

09/25/2018: Prof. Gorlatova gave an invited talk at the IEEE Sarnoff Symposium in Newark, NJ. The slides of the talk, titled Towards Intelligence on the Edge: Restructuring Computing to Enable the Next Generation of the IoT, are available here.

09/13/2018: We are thankful for the AWS Cloud  Credits for Research Award that will support our work on restructuring applications for edge/fog computing. Joint proposal submission with Dr. Liang Zhang.

05/27/2018: I am thrilled to be joining Duke University Department of Electrical and Computer Engineering as an Assistant Professor in July of this year.

05/10/2018: Our work on applying fog-based reinforcement learning to securing augmented reality outputs has been accepted to the ACM SIGCOMM AR/VR Networking Workshop, and will be presented in Budapest, Hungary, in August. The work is led by Surin Ahn, Princeton BS’18, who will be starting her Ph.D. studies at Stanford University Electrical Engineering Department later this year. [Paper PDF]

1/05/2018: A video recording of the fog architecture panel at IEEE Fog World Congress’17 is now available via IEEEtv. [panel video ; my presentation starts at ~ 10:45]

12/08/2017: I spoke with Embedded.fm about edge computing changing the world of electronics as we know it: When Toasters Attack.

12/04/2017: An article in Multichannel News mentions the work with Comcast Corporation that I am helping Prof. Mung Chiang lead at Princeton University EDGE Lab.

11/06/2017: I presented a demonstration of our fog computing testbed at ACM SenSys’17 in Delft, the Netherlands. Joint work with Liang Zheng, Edward Chang, and Chege Gitau. [Demo abstract PDF] [Video of the demo] 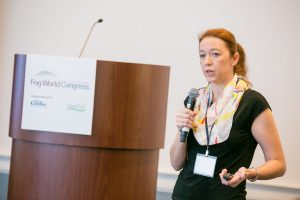 11/01/2017: IEEE Fog World Congress was a blast. I described some of the directions of the OpenFog Communications Working group on the Interoperable Architectures panel [ panel presentation video ], and talked about my research on the Research Around the World panel. Chege Gitau and myself also presented a demo of our fog computing testbed at the Research Demonstrations session of the conference. [More information]

10/04/2017: I presented my work on fog computing at the Computer Systems Engineering track of the 2017 Grace Hopper Celebration of Women in Computing. My talk was titled “Fog Computing: Challenges and Solutions.” [ GHC presentation PDF ]

9/28/2017: We presented a demonstration of our fog computing testbed at the 2017 NYC Media Lab Summit. [more information]

7/19/2017: We are grateful to Microsoft for supporting our work with a Microsoft Azure Research Award, which provides us the equivalent of $20,000 in Azure computing services. [more information]

6/22/2017: I gave a talk titled “In and Out of the Fog: Working with Industry to Define New Computing Architectures” at a Princeton Postdoctoral Council Seminar. 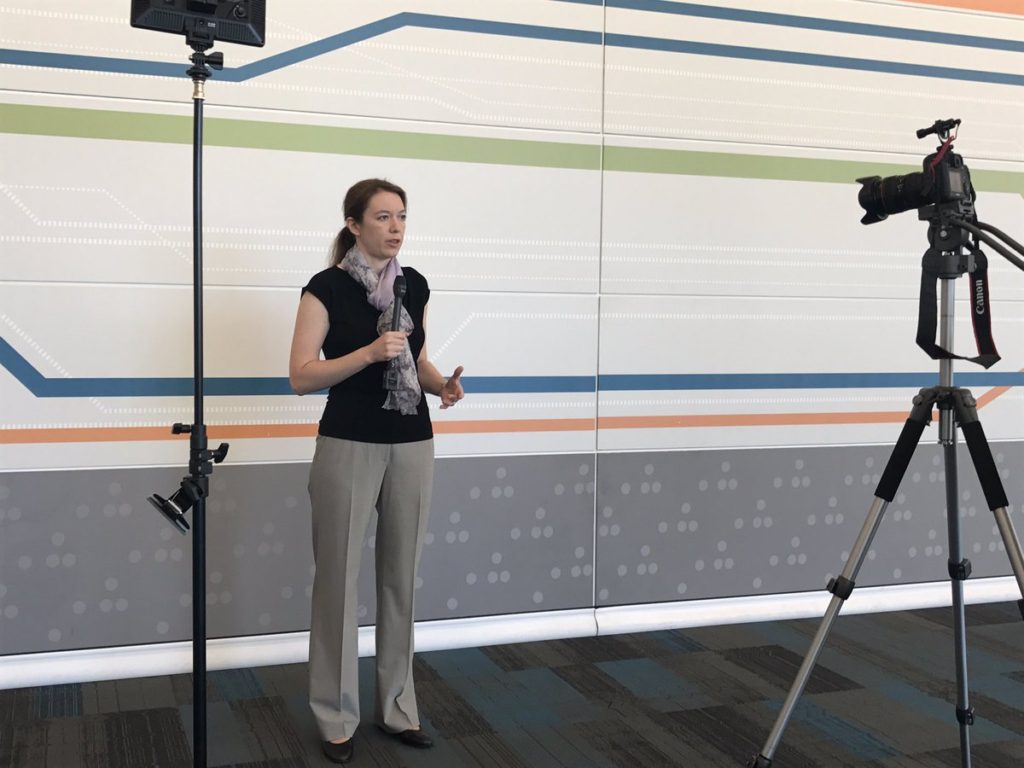 Sharing my thoughts on the future of technology at IEEE WIE ILC.

05/22/2017: I spoke on an invited panel about the future of technology, titled “The Next Frontier: a Spirited (Friendly) Debate”, at the Innovation Track of the 2017 IEEE Women in Engineering International Leadership Conference (IEEE WIE ILC) in San Jose, California, attended by more than 1,200 people. [IEEE WIE ILC speakers].

5/20/2017: My research is in the news: New Yorker Magazine article “If Donald Trump Were Actually a Battery” mentions my work on human motion energy harvesting, in context of president Trump’s recent comments about the principles of human body as an energy supply.

4/20/2017: I attended DARPA Dispersed Computing (DCOMP) kick-off PI meeting in Arlington, VA. We are contributing to two DARPA DCOMP projects: Network Back-haul Layered Architecture (NEBULA) led by BAE Systems and Dispersed Computing via Successive Refinement and Pricing with Resilience and Scale (DSPRS) led by LGS Innovations. [project award information] [DCOMP in the news] This is the second time I work on large DARPA projects [blog post about my experience and DARPA approach to research]. 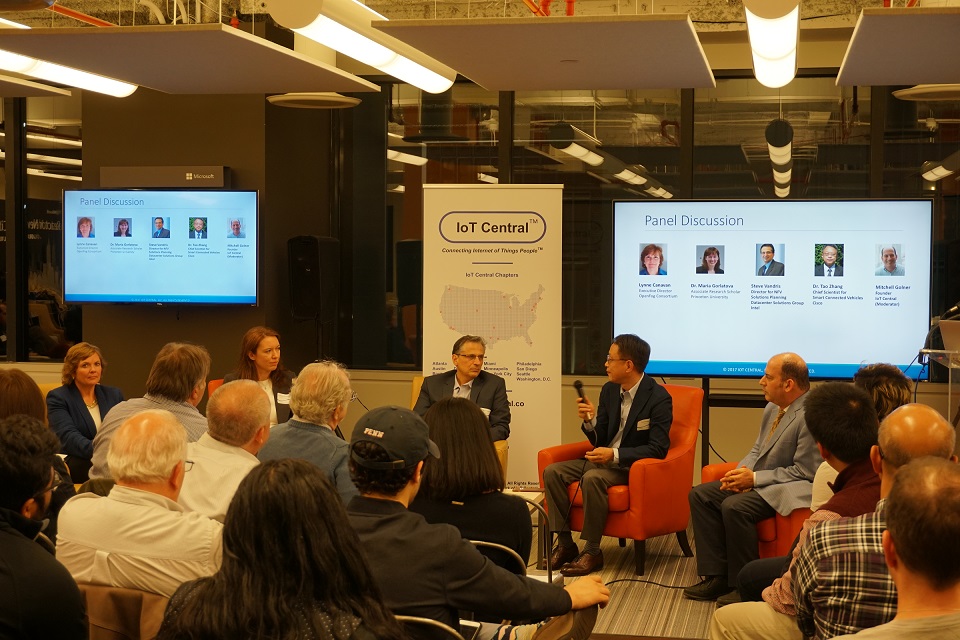 4/19/2017: I spoke on the Fog Computing and IoT panel of the IoT Central meetup in NYC, simulcasted with Austin, TX. [talk video].

2/08/2017: OpenFog Reference Architecture is now publicly released. I contributed to the reference architecture both individually and as the co-chair of the OpenFog Consortium Communications Working Group. [EETimes commentary] [ECD interview with me and 2 other OpenFog technical committee members]

12/15/2016: I am co-chairing the Internet of Things and Wearable Technology Track of the Grace Hopper Celebration of Women in Computing for the second time in 2017. In 2016 the track was attended by 8,000 people.

10/1/2016: I was elected to co-chair the OpenFog Consortium Communications Working Group. OpenFog Consortium is a public-private ecosystem that accelerates adoption of fog computing. The Consortium has over 50 member organizations including Intel, CISCO, Microsoft, ARM, and Dell.

8/12/2016: I joined Princeton University Electrical Engineering Department as an Associate Research Scholar in the EDGE Lab led by Professor Mung Chiang. I am working on defining system architectures for the emerging area of fog computing. 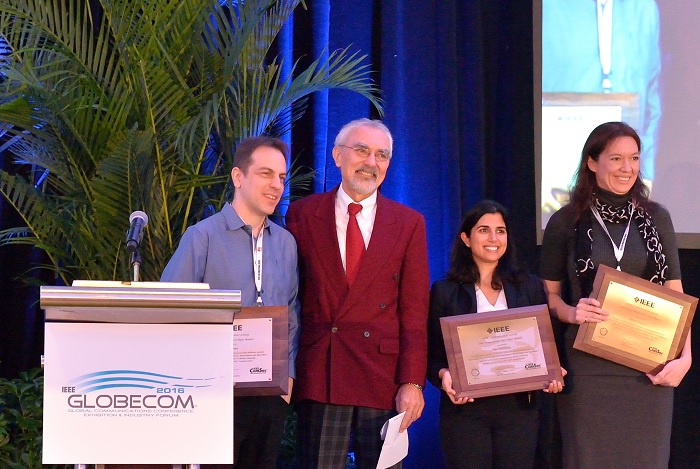 Receiving the award at IEEE GlobeCom 2016.

3/30/2016: I am  co-chairing the Internet of Things and Wearable Technology track of the 2016 Grace Hopper Celebration of Women in Computing. This is one of only 8 technical tracks at a conference that is expected to be attended by more than 15,000 people.

10/11/2015: I served as an Innovation Awards Judge for the 2016 Consumer Electronics Show (CES). I judged 2 product categories: wireless handsets and wireless handset accessories.

2/20/2014: My paper titled “Movers and Shakers: Kinetic Energy Harvesting for the Internet of Things“, has been accepted to ACM SIGMETRICS’14 (17% acceptance rate). Joint work with John Sarik and Guy Grebla. This work has previously been profiled by MIT Technology Review Physics ArXiv blog and several other online media outlets. [Physics ArXiv Blog Article]

11/6/2013: I attended the 2013 Rising Stars in EECS Academic Career Workshop for Women organized by the MIT EECS Department (invited participant). 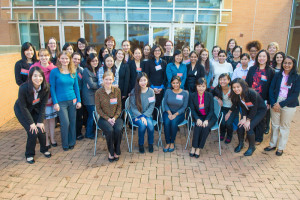 At the MIT EECS Rising Stars event with the other attendees.

5/10/2013: I was awarded the Columbia University Electrical Engineering Department Jury Award for Outstanding Achievement in the areas of system communications and signal processing, the highest award given by the department to a Ph.D. student. [Award Info] [Blog post] 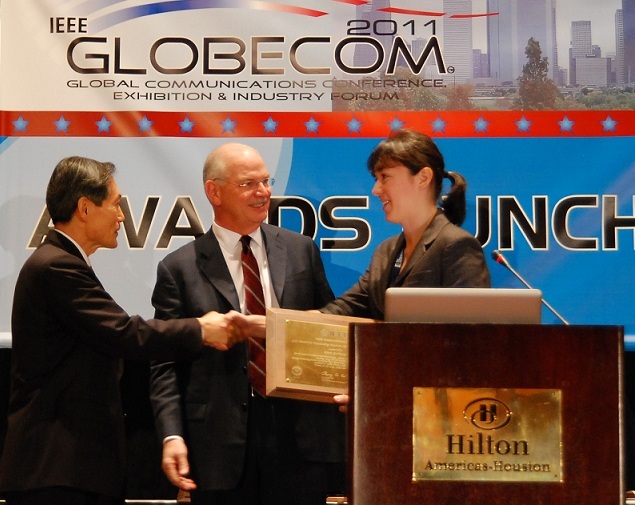 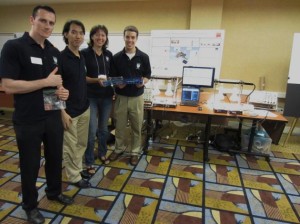 Presenting a demo at ACM MobiSys’11.