My treasure of a dentist, the most caring of all dentists I ever had, said the darnest thing to me the other day: “You do research, really? Good for you. I could never do it myself, it’s so boring.” She said it as she was reaching for a sharp triangular implement which, she explained earlier, was “like a cookie-cutter, but for the gums.” Cookie-cutting gums is fun for her, you see. Research is boring. My jaw would have dropped if my mouth was not already propped wide open with a different triangular (this one rubbery, not sharp) implement.

But in a way I see where she is coming from. Academic research in general, and academic publishing in particular, are so specialized and regimented that they may come across as stuffy, and, yes, at times even boring. There is only that much opportunity for fun and humor in publishing serious work.

In his book Audition, Michael Shurtleff, a famous casting director, points out that there are opportunities for humor in dark and emotional classic dramas — an observation that startled me because humor is among the last things I would associate with serious dramatic work.

Behold: my own small contribution to injecting offbeat notes into a serious academic publication. Kinetic Energy Harvesting for the Internet of Things is serious work, published in the IEEE Journal on Selected Areas in Communications and presented at a selective (17% acceptance rate) ACM SIGMETRICS conference. My blood, sweat, and tears, this work; rigorous approaches to modeling, data collection, derivations, and proofs. I feel a certain sense of pride in that I sneaked, into this serious work: 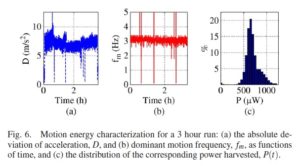 I now wonder — where does this “cameo appearance” stand? What do others sneak into their papers? Scientists can have fun — including dancing their PhDs. How many scientists have fun with their writing, in ways that a casual reader may not immediately spot?

This entry was posted in Creativity, Uncategorized. Bookmark the permalink.