How Slow is a Pebble Watch?

Just as a I started considering using Pebble Watches as a low-power IoT platform for my experiments with fog computing, Pebble announced that the watches will not be manufactured anymore. Pebble is sold to Fitbit; independent operation of Pebble stops. And this is only mere weeks after I started characterizing Pebble performance. 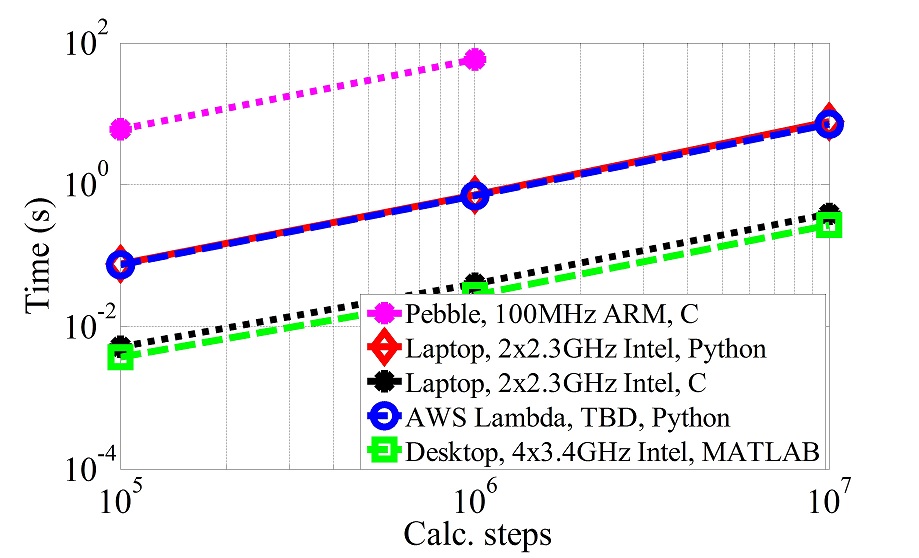 How quickly does Pebble compute? For example, the figure above shows the time a Pebble watch takes to calculate Pi to different precision levels (this calculation is often used to benchmark CPU performance), compared to other devices. The y-axis on this figure is logarithmic; the devices used and the language the Pi calculation code was written in are noted in the legend. I used both C and Python because not every language is supported on every platform: Pebble does not support Python, AWS Lambda does not support C. The speedup we get from having the compiled C code is evident from the comparison of C and Python code running on the same laptop; the speed-up is an order of magnitude, just as we would expect.

Pebble is slow compared to more powerful devices. This is what we would expect, given its’ 100 MHz energy-efficiency-optimized Arm CPU, but the actual numbers are still good to see. If you have a compute-intensive operation you want to execute on a Pebble, the operation would run > 100x faster on a modern laptop. Thinking about shipping the execution off to AWS Lambda for execution? That would run >10x faster than the Pebble, despite the code having to be written in an interpreted, rather than compiled, language. (You’d need to consider communication time with AWS Lambda though, which is non-negligible given that AWS Lambda instantiates on demand. I have not yet explored those tradeoffs though.)

My Pebble is perhaps the only Pebble in the world that can calculate Pi to astronomical Super Pi precision levels. I am sad to be discontinuing these experiments with is. Pebble is a fun toy to play with, but I can see how it was not a good product. While I loved playing with writing apps for the Pebble, when I needed a sports watch, I used my Garmin rather than the Pebble.