Projected Ending of Moore’s Law: Can Engineering Creativity Sustain The Rate Of Progress?

The projections of the ending of the Moore’s Law are nothing new — seemingly, they were being made for many decades. For example, back in 2009 an NSF director Jeannette Wing had the following graph in her ACM MobiCom talk slides (click to enlarge): 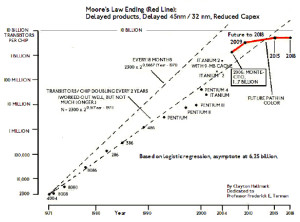 While the projections are not new, media reports on them have seemingly been intensifying. Within the last month, both The Economist and The New York Times chose to run articles on Moore’s Law coming to an end:

Both articles note the long-term possibility of other materials replacing silicon in the computer chips — which is definitely reasonable, given that IBM’s first-ever 7 nm chip is based on silicon-germanium and that Intel is rumored to be moving from silicon to indium gallium arsenide.

Both articles also mention that smarter engineering may keep the chip technology advancing when the underlying physical transistor technology shrinking slows down. The New York Times quotes David Brooks on this, who said “If silicon is the canvas we paint on, engineers can do more than just shrink the canvas“.

And this is the point I hesitate to agree with the journalists on. Surely, Engineers Rule The World – ERTW! – and can do everything! As a card-carrying electrical engineer, I cannot agree more strongly with this message. 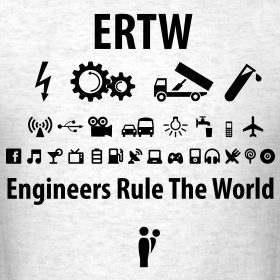 Yet, engineering design innovation is fundamentally different from the innovation in the very core of the underlying physics. In the design itself, there are surely relatively easy improvements — the low-hanging fruit that will be picked once the field stops the ever-lasting chase of the most advanced transistor technology node. The performance improvements of 10-20%, and possibly as much as 30-40%, are virtually guaranteed once undeniably brilliant VLSI engineers put their minds to it – I agree with this entirely. Beyond those 10-40%, though — I am not so sure how far we would get. It take a lot of creative engineering energy to enable progress at the rate that is anywhere near the Moore’s Law rate. Currently, chip development is lengthy, exorbitantly expensive, and, partially because of this, all but forgotten by the venture capital (“only 4 [chip] startups received first-round venture capital infusions in 2013 and only 7 did in 2014, with no seed investments in chip companies either year“, tells us the Wall Street Journal). These conditions dampen, rather than support, world-changing engineering creativity — the entire technology ecosystem will have to be very different than it currently is. We need ease of experimenting with design ideas (side note: FPGA-based ASIC prototyping goes in the right direction for that). Cheap design tools. Cheaper and faster ways to the market. Access to investment capital. These are all tied together, and all will be jointly necessary if we are to continue seeing chip performance advances in the post-Moore’s Law conditions. Humans getting creative, as the New York Times puts it, is one thing, the world enabling their creativity is another. Will the ending of Moore’s Law create the conditions necessary to completely overhaul the existing chip design ecosystem? And even if the ecosystem is changed entirely and dramatically, will human creativity be enough to sustain the rate of progress that Moore’s Law afforded?

I am an engineering program manager at D. E. Shaw Research, where we are creating supercomputers with specialized ASICs for advancing the state of drug discovery. The opinions expressed on this blog are my own. In no possible way does anything I say on this blog represent my employer.

This entry was posted in ASICs, Creativity, Hardware, How the world is changing, In the news, Industry, Industry trends, Research, Technology. Bookmark the permalink.