New Management Models: Do They Make Control-Theory And Information-Theory Sense?

There has been a lot of talk lately about new management models, that is, the alternatives to centralized top-heavy decision-making that has been the staple of the corporate world for so long. Coursera has had a fun class on this, “Managing the Company of the Future“, largely based on the lecturer, Prof. Binkinshaw’s, book “Reinventing Management“. And of course the Zappos’ holacracy (which I cannot help but habitually spell as holacrazy) experiment has been getting quite a bit of news coverage as well (see Forbes May 2015, New York Times July 2015, Atlantic October 2015, and many others).

As somebody who managed cutting-edge R&D efforts in several companies and one university over the last decade, I know first-hand that the top-heavy command-and-control model of management is all but dead. In the R&D world, this model was already outdated as far back as the time of the management classic, Mythical Man Month. In this day and age, no skilled engineer has a need to put up with a command-and-control manager — and no ambitious manager would even want to work in a command-and-control structure, as it is crystal clear that this structure does not end up producing the best products. And I also know first-hand that nothing truly replaced the old model. For the most part, holacracy experiments notwithstanding, there truly is no golden standard at this time. I, for one, believe that the current state of affairs, in business management as a profession, is sub-optimal. My intuition tells me that we can do better.

Yet, as somebody who also studied distributed systems for many years, I am deeply skeptical of models like holacracy that seem to come out of nowhere. A centralized management model is like a centralized communication network. Top-heavy, non-reactive, prone to delays — but simple and reliable. Plus, its been done for so many years by so many people — all its kinks have been ironed out. The new, softer and looser, management models are like distributed mobile ad hoc networks — there is no way you’ll throw something together and it will just work. All system problems — such as information-gathering and information-sharing, control, coverage, and system security — become harder, not easier, when a system is distributed, rather than centralized. I am absolutely convinced that the new management models need to be developed and carefully examined from control-theoretic, information-theoretic, and just basic distributed network, protocol, and algorithm perspectives — not developed by simply blindly following random manifestos. 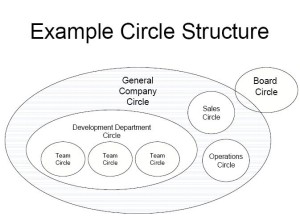 Holacracy circles example. Has anybody done any kind of analysis on this structure as a control system? As an information sharing system?

I am an engineering program manager at D. E. Shaw Research. The opinions expressed on this blog are entirely mine and my own. In no possible way does anything I say here represent my employer.

This entry was posted in Communication skills, How the world is changing, In the news, Industry trends, Management, New business models, Uncategorized. Bookmark the permalink.