An activity that enhances both creativity and communication skills — wouldn’t that be a fun activity to try? Uri Alon, a scientist at Weizmann Institute of Science, promotes creativity of improvisation theater training as similar to creativity of truly innovative scientific discoveries [ link to Uri’s TED talk ]. In the keynote speech of the 2015 Supercomputing conference, Alan Alda, an Oscar-nominated actor and a long-time host of Scientific American Frontiers show, talks about the benefits of improvisation training for scientific communications.

Alan Alda’s talk gives me a push I need to give improvisation theater training a try. December 2015 through February 2016, each Monday evening I spend 3 hours learning how to do improv at NYC Magnet Theater .

Improv training is of course loads of fun. From the first 30 minutes of the first class, you are throwing imaginary knives at each other, playing with imaginary balls, acting out scenes of various degrees of madness. Fun starts immediately and does not stop until the very end of the very last class.

If you never tried doing improv (which I have not, until starting this program), you may, like me, find it different from what expect from, say, seeing it on TV. Improv is not about being a funny guy or gal. You actually do not tell jokes in improv, you work with your scene partners to create situations and relationships between characters that naturally, when things go well, become hilariously funny. 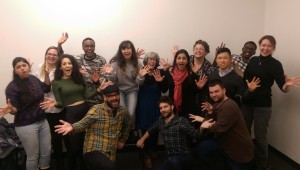 I expected that the classes would help me develop as a public speaker, and they did. They helped me feel more confident about speaking up on certain occasions – but probably multiple other types of training would have had the same effect (e.g., acting classes, Toastmasters meetups).

There is far more to improv and communication skills that simple public speaking though, because improv, as a performance style, is all about communications. The imaginary world created in each improv scene only exists when the scene’s participants accept each other’s realities unconditionally, rolling with the punches as the scene starts escaping from what they originally had in mind. I enter a scene thinking that me and my partner are two teenagers on a date. Turns out we are a long-married couple whose teenage children are giving them grief. Or maybe we are siblings. Or we are two grocery store clerks that are ending a shift – and we are both men in the scene, too, who said that one gets to remain in one’s gender? Two critical communications-related components in this – (1) listening, seeing all your partner’s comments as gifts to build up on, rather than hindrances to your own version of the story, and (2) remaining functional, true to character and fully present, in the scene as its potentially unbounded levels of ambiguity knock your reality around.

Not only are improv performances about communication skills — many of them are also specifically about intricacies of group communications. Think of the worst meeting you’ve ever been at – where people shouted past each other, somebody called somebody else stupid, 15-20 minutes were spent on a tangential discussion that deserved no more than 2 minutes of the group’s time, people interrupted one another, somebody spoke for 15 minutes straight without letting others put in a word. A good improv performance is the opposite of that. You always listen to others and build on their ideas – no calling anybody stupid, no dismissing (of anything!) anybody else says. Also, a group improv scene only works if everybody in the scene contributes, but nobody hogs the limelight (improv is about building on your partners’ reality, if you are speaking by yourself for a long time, you are going against the very spirit of this theater style).

The so-called scene “editing” in improv deserves a separate mention. “Editing” means ending other people’s in-progress scenes so that the performance can move on (to another scene, or another story; in TV shows like “Whose line is it anyway?” the host edits all scenes, while in Magnet classes fellow performers do it for each other). Editing is a skill heavily based on communication abilities, as it requires substantial awareness of self and others. You do not edit because you believe that a scene you have in your head is better than the current one – oh, no, no, no. You edit because you want to help your scene partners move forward. In this way, holding self back from editing willy-nilly is similar to not interrupting others in a meeting although what you have to say is – obviously! – far more interesting than what is being discussed. At the same time, editing is also remarkably similar to suggesting, in a meeting, that people whose conversation has gotten off on a tangent let the rest of the meeting participants get on with what they came there for – stopping a “scene” that has run its course and became unproductive, letting the rest of the “performance” continue.

Having done this 8-week class, I remain curious as to how continuing to practice this will take me — in public speaking, group communications, and perhaps in more than that? So I am moving on to Magnet Theater Level 2 — lets see where that leads me!